Whenever we begin working on a new play in the English theatre course it is something of an adventure, we know where to start but who knows where it will finish!
For this year's theatre production I decided on a romantic journey and no less than Shakespeare's story of magic and love, 'A Midsummer Night's Dream”. The first job was to cast the play (my premise always being that the older students take the main parts and the younger students the minor roles). In this case many parts seemed created for the actors. Afe fitted into the role of Puck like a hand in a glove! Her sprite was humourous and blundering, contrasting perfectly with Oberon, Simone Manzini's, regal King of the Faires. (Simone heroically battled his way over from the Lungarno De Nicola building every week).
The two girl lovers, Hermia and Helena, were acted by Noemi and Laura. Their experience (this is their third year acting) meant they performed with veracity and spirit. Titania, the Queen of the fairies, could only be played with the elegance of Lavinia. The boy lovers, Demetrius and Lysander, were played with dedication by Simone Landi and Gabriel (who, despite being a first year gave a very mature performance).
The actors, Giada, Elisa, Irene, Sabina and Arianna made a great team and a good back-up to Lorenzo's appropriately silly Bottom. Elena doubled roles juggling effortlessly fairy and Queen Hippolyta, and Viola made an irate Egeus. The faires, played by Xhejdi, Aimee, Giorgina and Elena were priceless in their creation of atmosphere and visual effect. A special thanks to Gian Marc who made a last-minute guest appearance as Duke Thesus learning his lines virtually over night. And as to all those pretty, flowery trees and bushed on stage? The actors did them all themselves whipping them up in seeminly no time!
A special,big thanks to Mrs Carradori for her support and resolving of all the problems that came up. Thanks to the headmaster for his encouragement and interest in the project. And thankyou, students, for all your effort.
A great performance actors, a great finish! 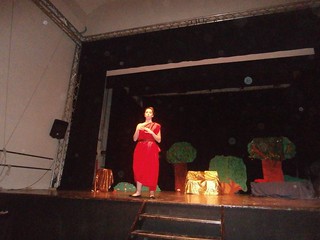 Created with Flickrset for Joomla.